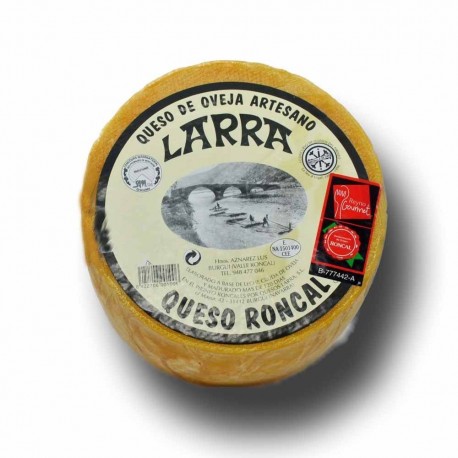 Excellent Roncal cheese of the quesería Larra was awarded silver in the World Cheese Awards 2014. The Roncal is a cheese that is produced by hand from sheep's milk. The Protected Designation of Origin ensures a cheese produced only in the municipalities in the Roncal valley, Navarre, with the traditional techniques of this area. The end result is a mature cheese, oily, with a very defined and intense flavor of sheep's milk, and very creamy on the palate.

Served in units approximately 1 kg or half pieces.

Notify me when available

Roncal cheese is a semi-hard cheese from sheep's milk produced from beginning to end in the municipalities of Isaba and Uztárroz, in the Valley of the Roncal, Navarre.

This is a cheese with a smooth, hard, thick, straw-colored rind covering a bone-colored paste, with numerous very small irregular holes, and rough, dry and elastic to the touch.

In its taste, persistence, and high intensity, matured sheep's milk is completely identified, a little acidic, and the aroma of chewing reminds one of dried fruit, pineapple or cider.

Roncal cheese has great versatility in its use. You can eat it by itself, paired with a good wine from Navarra, or complementing dishes in desserts or with smoked meats, dried fruit, pasta, etc.

Buy it here on Al Queso, your online shop of artisan cheeses.

Be the first to write your review!